You should be careful to whom you spill your guts to because one day they may decide to air your dirty laundry on their clothesline for anyone passing by to see.

No doubt the water cooler buzz right now is the sordid carryings-on of the Johnny Depp and Amber Heard defamation trial. To put the notoriety of the case into perspective, a Google search for “Johnny Depp and Amber Heard” returns “About 186,000,000 results in 0.54 seconds” versus a search for “Tom Cruise and Nicole Kidman” which returns “About 20,900,000 results in 0.70 seconds,” a staggering difference of almost 165 million hits.

So how come coverage of and interest in the trial is off the hook? The answer is simple, it’s a sensational, highly public example of “he said, she said” and their turbulent relationship is being played out under the world’s magnifying glass.

In 2018, two years after the couple’s divorce and a restraining order filed by Heard, Heard wrote and published an op-ed in the Washington Post. While she never mentioned Depp by name, she referred to herself as, “a public figure representing domestic abuse.” The article in turn led to Depp suing Heard for defamation, and years of long and sorted details of their personal relationship being aired in the public domain. The situation rapidly spiraled downwards, as both Heard and Depp tried to use the court of public opinion to improve their respective standings, while in reality, making themselves look worse and worse. The result – two tarnished reputations and the ugly defamation suit which is all over the news today.

While some may be enjoying the entertainment value of the Depp-Heard case, others find the idea of knowing such intimate details of the lives of people they’ve never met to be uncomfortable and inappropriate. And you’ve got to wonder, how does the (ex)couple feel now, in hindsight, about their choices to make their personal life so public?

The damage caused by public exposure celebrities experience during messy breakups are just grander scale versions of what non-famous people experience when going through the same life events. Since mass media is not typically accessible to the other 99% of the population, the tool of choice for smearing soon-to-be ex-spouses is of course social media. Additionally, since the courts have ruled repeatedly that there is no expectation of privacy on social media, when accessed and used properly proof of illicit and reckless behavior, such as infidelity and drug use, can be a goldmine in contemptuous divorce proceedings.

Conversely, the courts have ruled extensively in favor of the illegality of creating and trying to use information ill-gotten, such as through the use of spyware and secret recordings. Under Fla. Stat. §934.03, secretly audio recording another individual is a 3rd Degree Felony offense, punishable by up to five years in prison and a $5,000 fine, and each audio recording is treated as a separate Felony. It is also a 3rd Degree Felony every time an individual shares the secretly recorded audio.

American philosopher and retired Harvard professor Thomas Scanlon’s body of work includes his notable opinion published in 1975, “The first element of a theory of privacy should be a characterization of the special interest we have in being able to be free from certain kinds of intrusions. The most obvious examples of such offensive intrusions involve observation of our bodies, our behavior or our interactions with other people.”¹

Clients who subscribe to Scanlon’s philosophy and view the business of using social media and other public forums unsavory, find the benefits of confidentiality in divorce mediation appealing. In my experience, parties speak more freely and comfortably knowing that their negotiations and offers will be kept from public scrutiny, including family and friends, and the court should the case not be settled in mediation. Further, the informal nature of mediation helps couples open up to brainstorming without fear of being judged and the need to posture.

When you need help with mediation, you can count on my 18 years of litigation experience and seven years of exclusively practicing family mediations. We will settle your case expeditiously with a realistic outcome that is satisfactory to both parties, in a confidential and private environment. 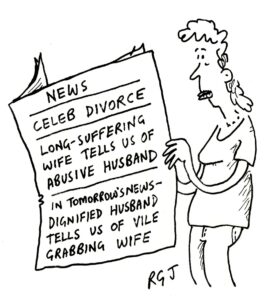 Think You’ve Heard it All?!

Give Us a Grandkid or Pay Up!

A couple is suing their only son and his wife for not giving them a grandchild after six years of marriage. Sanjeev and Sadhana Prasad, 61 and 57, say they used up their savings raising their son, paying for his pilot’s training, a lavish wedding and his honeymoon. Speaking to news source ANI in India of the “economic toll” he’s incurred, the father and plaintiff said, “I don’t have any money. We’re troubled financially and personally.”

And now, they say, it’s payback time – either the son and daughter-in-law give them a grandchild within a year or reimburse them 50m rupees ($650,000 US).

Talking to BBC Hindi, Sadhana Prasad said her son and daughter-in-law’s refusal to have children had opened them to “taunts from society” and described it as “mental cruelty.” “We had no option but to go to the court. We have been trying to talk to them but whenever we raise the issue of grandchildren, they become evasive. Their decision not to procreate would mean the end of our family name,” she said.

AK Srivastava, the couple’s lawyer who filed the petition, said “this case portrays the truth of society. We invest in our children, make them capable of working in good firms. Children owe their parents’ basic financial care.”

It’s yet to be seen how this case will turn out, but it sure is receiving near-celebrity news coverage across the globe.