SAYING “I DO” TO A STRANGER

With every conceivable scenario that makes for addictive, binge-worthy TV, it’s no wonder millions of people worldwide commit exorbitant amounts of time watching scandalous, titillating, fantastical and improbable reality shows. The creators and producers of these shows are brilliant. They’ve mastered formulas for programming which scratch an itch viewers don’t know they have, keeping them on the hook for years.

Take 90 Day Fiancé, which features “real-life” couples, each going through the rigors of obtaining a K-1 visa, which allows a non-U.S. citizen who is engaged to a U.S. citizen to enter the U.S. legally. According to the producers, the pairs met, likely online, prior to their involvement with the show and are engaged or get engaged on camera. The show documents the complications each couple faces while getting to know each other, such as learning about and overcoming cultural differences and gaining the acceptance of family and friends. Oh yeah, and they have to figure out if they actually like each other or can tolerate each other enough to get married.

The catch? The visas expire in 90 days. If a couple says I Don’t instead of I Do at the end of the 90 days, the visa holder must leave the U.S. The producers say they don’t create the drama. Rather, the U.S. government does by imposing the 90-day expiration date.

Whatever the source, for nine seasons fans have sat on the edge of their seats episode after episode, desperate to see the drama unfold. If fanatics want more, there are over a dozen spin offs of 90 Day Fiancé they can watch!

Then we have Married at First Sight (MAFS). Currently in its 15th season, this reality show features hundreds of singles who hope to be matched with their perfect mate by a group of relationship experts including a psychologist, a pastor and a sexologist. After putting the applicants through a battery of interviews and tests, the experts select ten singles to couple up.

As the name of the show suggests, each pair meets for the first time at the altar for an elaborate wedding where they are married in front of their family, friends and millions of viewers. After spending a honeymoon and the balance of eight weeks living together as a married couple, they must decide to stay married or split on Decision Day.

I find a relevant distinction between the participants on the two shows. On 90 Day Fiancé the parties sorta-kinda know who they are partnering with before saying I Do. And the non-citizen has a strong motivation to marry and stay married if they want to remain in the U.S. On MAFS, the participants apparently want to be married in earnest, and/or want to be TV celebrities, and they are willing to place their faith in a team of experts to match them with a perfect stranger.

MAFS season 15 bride-to-be Morgan explains, “If these matchmakers can see something in me that I’m not seeing, and if they can find someone that meets (my) standards, then I’m ready.”¹

Dr. Joseph Cilona, PsyD served as the psychologist for three seasons of MAFS. Part of his role was to conduct clinical interviews and administer customized questionnaires to evaluate each person’s values, family history, romantic relationship history, career history, lifestyle habits, etc. He claims to have spent around 400 hours evaluating data per each participant.

Based on Dr. Cilona’s experiences on the show, he stands behind the idea that a group of experts can be successful at pairing people, perhaps better than couples who decide to marry because of their amorous feelings and physical attraction to each other.

In an interview with The Wrap, Dr. Cilona says, “When it comes to dating, many people use their emotions as a compass for navigating love and romance, and emotions often play the primary role in decision making and behavior. For those that want to make better decisions… it’s important to remember that there are often many, many variables that influence compatibility and complementarity in love and marriage, and that feelings are just a part of a much larger picture.”²

Keeping in mind the national average of divorce in the U.S. hovers around 50%, it begs the question: Are the shows more or less successful at pairing couples who remain married versus get divorced?

90 Day Fiancé (the original series): Over the course of eight seasons there have been a total of 48 couples. Supposedly the majority of them married at the end of the 90 days, but I couldn’t find the exact number, anywhere. As of this past April, it is reported that 26 of the couples are still together. Hence, the show claims they have a 54% success rate. I can’t vouch for their results, however, since I don’t have the total number of married couples to compare to the number of couples who divorced.

Married at First Sight: Before we get to the statistics on MAFS, it is important to note that couples who marry on the U.S. production of the show are 100% legally married. To terminate the marriage they need to go through legal divorce proceedings and annulment isn’t an option. There is one safeguard in place – the participants sign a basic prenup agreeing that whatever they enter the marriage with is what they walk away with should they divorce.

To note, in some of the other countries where MAFS is produced, such as Australia, the marriage ceremony is not legally binding, and the couple can basically walk away from the union.

Back in the U.S., it appears that the parties personally bear all or most of the legal fees if they decide to divorce. I found vague references to the production company contributing to legal fees depending on when the couple divorces in relation to the end of the season they appeared on, but I could not find any formal published documentation.

So exactly how successful has MAFS been with their network-produced, expert-derived arranged marriages? At the completion of season 14:

Perhaps missing from the team of relationship experts who invest considerable time vetting and pairing the MAFS participants is a divorce attorney and a divorce mediator. To take it a step further, conceivably a reality show where only attorneys and mediators – experts who have spent years observing marriages unravel – would be equally or more successful at picking couples whose marriages will last!

Regardless of how your clients came to be married and decided to divorce, you can count on my eight years of exclusive family law mediations and 18 years of litigation experience to help both parties work through their own new reality until an amicable outcome is achieved.

Keep reading for this month’s “Just for Fun”

It is Mediation Week, as recently proclaimed by Carlos G. Muñiz, Chief Justice of the Supreme Court of Florida 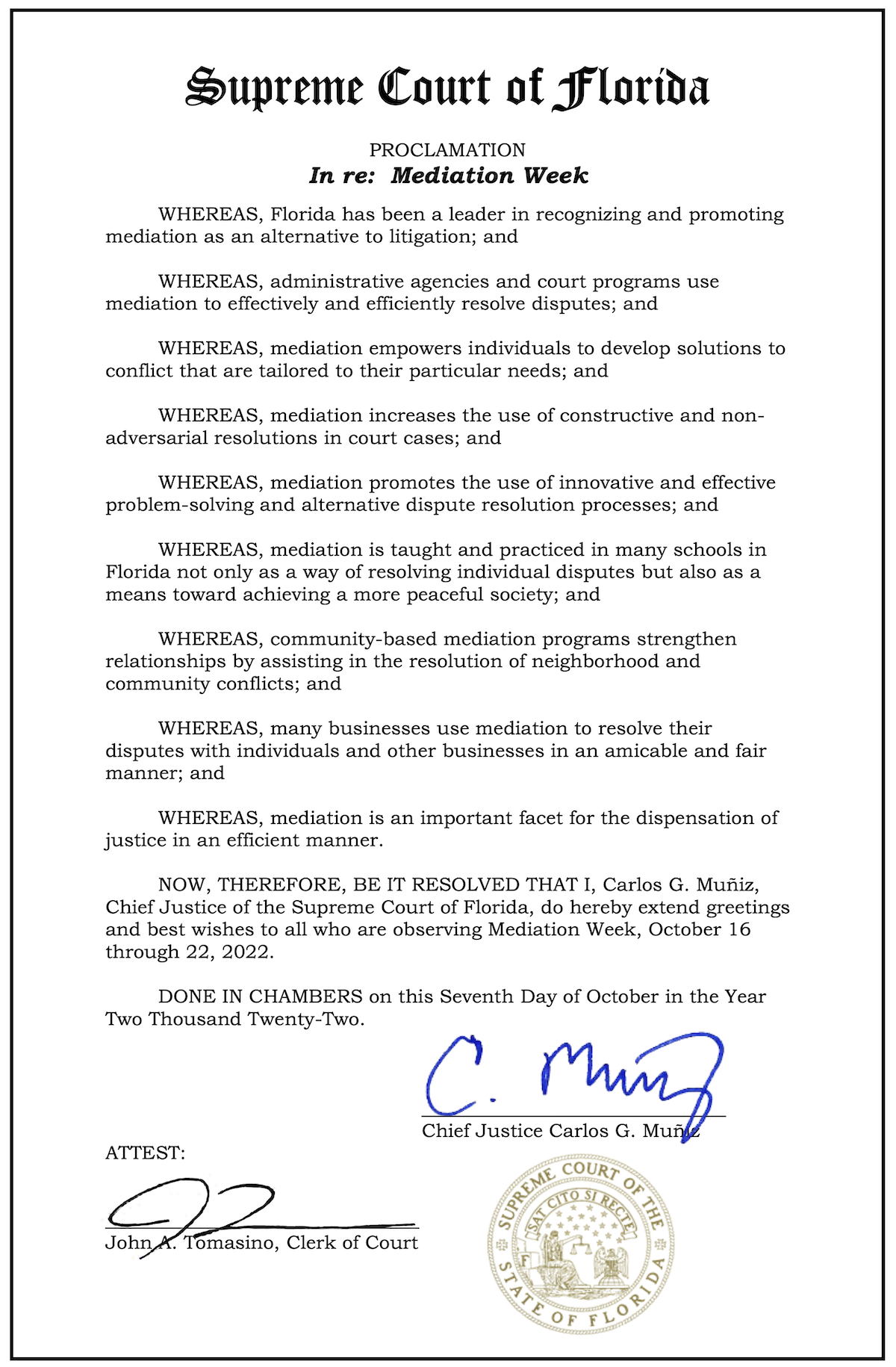 “Married at First Sight is a postmodern horror show; hosted by barely ethical quacks who go out of their way to prove some kind of vague hypothesis. That being said, it is impossible (to) look away as gullible, attractive Americans get what they signed up for: one month of forced domestic ‘bliss.’ Watching this show is like watching NASCAR. You follow the cars as they circle a well-worn track, waiting and praying for a dramatic wreck or a photo finish.”

“To the extent that arranged marriages work at all, the family relationships play a HUGE role, and that starts long before the marriage. In the show, the sociologists are substituting for the families, which doesn’t work, because the sociologists have no skin in the game. Other than producing an entertaining show.”

“This has to be one of the funniest reality shows ever!! It is such a weird and crazy experiment, and you really want the couples to stay together.”

“The show pretends to be a scientific experiment, but the ‘science’ is social science, and there don’t seem to be any real scientific principles applied in order to predict good outcomes. (The show’s experts say,) ‘I think they could have a successful marriage because they want similar things,’ is NOT science, folks.”